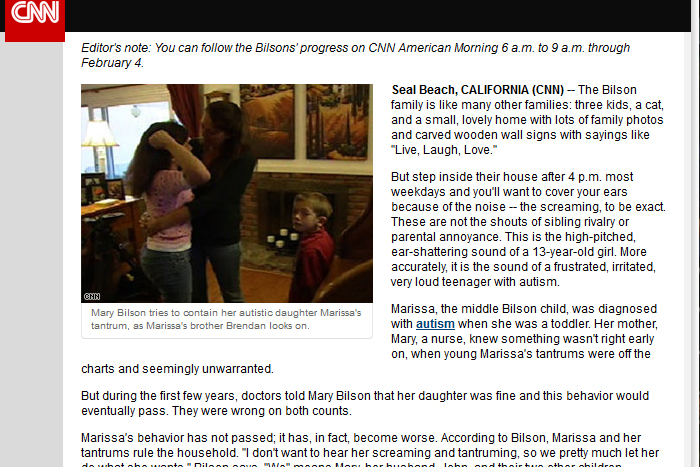 Seal Beach, CALIFORNIA (CNN) — The Bilson family is like many other families: three kids, a cat, and a small, lovely home with lots of family photos and carved wooden wall signs with sayings like “Live, Laugh, Love.”

But step inside their house after 4 p.m. most weekdays and you’ll want to cover your ears because of the noise — the screaming, to be exact. These are not the shouts of sibling rivalry or parental annoyance. This is the high-pitched, ear-shattering sound of a 13-year-old girl. More accurately, it is the sound of a frustrated, irritated, very loud teenager with autism.

Marissa, the middle Bilson child, was diagnosed with autism when she was a toddler. Her mother, Mary, a nurse, knew something wasn’t right early on, when young Marissa’s tantrums were off the charts and seemingly unwarranted.

But during the first few years, doctors told Mary Bilson that her daughter was fine and this behavior would eventually pass. They were wrong on both counts.

Marissa’s behavior has not passed; it has, in fact, become worse. According to Bilson, Marissa and her tantrums rule the household. “I don’t want to hear her screaming and tantruming, so we pretty much let her do what she wants,” Bilson says. “We” means Mary, her husband, John, and their two other children, Brittany, 15, and 6-year-old Brendan.

Keeping the peace means that, when it comes to Marissa, the rules are different. She is allowed unlimited time on the one family computer. She is allowed access to her siblings’ rooms and possessions. She is allowed to eat dinner at the computer instead of the family table.

But before you sit in judgment of the Bilsons, and suggest they just need a firm hand to keep their middle child in line, consider one thing: They are trying to cope with a child with severely impaired social sensibilities.

“Do you think people who don’t have children with autism know how tough it is to deal with them?” CNN’s senior medical correspondent, Elizabeth Cohen, asked Marissa’s mom in a recent interview. “No,” Mary Bilson replied. “And I don’t see how they could.”

She’s right — we can’t, because many of us have never seen autism in action, day in and day out.

Autism is described on the National Institutes of Health Web site as a “developmental disorder that appears in the first three years of life, and affects the brain’s normal development of social and communication skills.” According to the Centers for Disease Control and Prevention, autism and related disorders affect about one out of every 150 babies born each year.

Autism manifests itself in many different ways. Although there are some common threads, like language issues, repetitive movements and difficulties connecting to others, specific behavioral patterns are largely unique to the individual. “Children with autism are all different; they are like snowflakes,” explains Dr. Ronald Leaf, co-director of the group Autism Partnership.

The one thing that Leaf believes they all have in common is that “they are not expected to do enough.” Leaf insists we have set the bar too low for what we think children and adults with autism can do. “They are highly teachable,” he says. “You just have to have a good teacher.”

A good teacher is exactly what Bilson was looking for to help her with Marissa. The family had already tried various programs, starting when Marissa was a toddler — but nothing completely worked for her. And as Marissa entered her teen years, her behavior grew worse. Mary knew that her daughter needed to be reined in, and it needed to be done now.

“She is getting older. She’s 13 and her tantrums are louder and longer than they used to be. It’s just so inappropriate. It was OK when she was much younger, but now that she’s going to be an adult soon, she can’t be behaving this way,” Bilson says with tired resignation.

But what could the Bilsons do? This family doesn’t have a lot of extra money, and most programs either aren’t covered by insurance or have long waiting lists. The costs are staggering, according to the Web site FightingAutism.org. Families with autistic children can expect to spend $30,000 annually to provide proper medical, educational and other assistance necessary for dealing with an autistic child.

Enter Autism Partnership, or AP. This group, founded in 1994, offers extensive therapeutic services to children and adults with the disorder. One of its most unique programs is an intensive one-on-one, at-home intervention service that is similar in scope to what happens on the television show “Nanny 911.” It’s not cheap — about $2,500 per day, typically for a five-day period (with additional days on an “as needed” basis).

Most of AP’s work is grounded in a behavior modification technique known as Applied Behavioral Analysis or ABA. Essentially, the method breaks down behavior patterns, rewarding proper behavior while being careful not to encourage improper responses.

And that is exactly how AP therapist Rick Schroeder hopes to reshape Marissa Bilson’s worst behavior. The group, which met Marissa while working in her school, offered the Bilson family a free week-long intervention with the proviso that CNN be allowed to record the process.

The week started off with a day of observation — a day with lots and lots of screaming and tantrums, that left Schroeder stunned. He had observed Marissa at school where, he says, she was much less demonstrative.

But Schroeder is still eager and ready to tackle the challenge.

“I think the family is starting to realize something needs to change, and that’s very good,” he says after his day of observation. “As far as Marissa’s behavior goes — and the level that she is capable of going to — she’s pretty much out of control, for sure.” 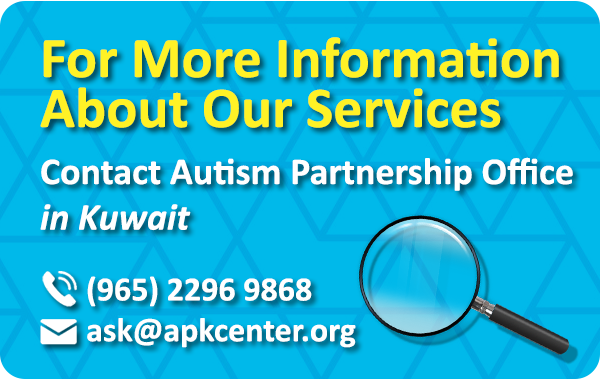 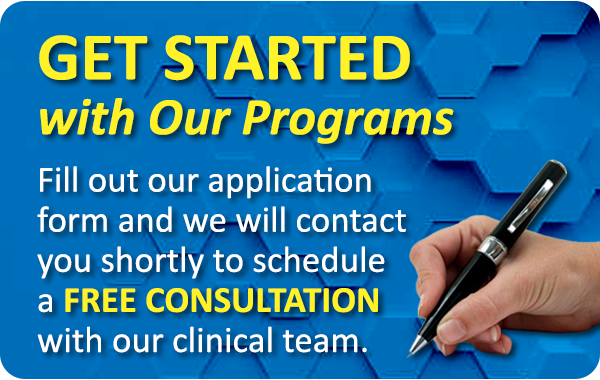